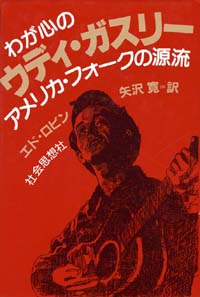 Tomorrow, July 14, Woody Guthrie would have turned 95.  Happy birthday, Woody!  Here’s a short little clip of him playing (gotta love the part where the narrator says “lost in archives for over 40 years”; sounds so nefarious):

Also, some really interesting news from the Woody Guthrie Archive:

The Live Wire, Woody Guthrie in Performance 1949 is due out September 6, 2007! Hear Woody Guthrie perform live, for the first time ever!

For the first time ever, fans and music lovers everywhere will be able to listen to a live concert recording of Woody Guthrie when the Woody Guthrie Foundation, under license to Woody Guthrie Publications Inc, will release a never-before-heard 1949 concert Woody did with his wife, Marjorie, at Fuld Hall in Newark, New Jersey. With the help of many talented recording engineers, the Foundation painstakingly transferred this rare live performance from a delicate wire recording to digital audio, and, with state-of-the-art technology, restored it to near-perfection. As part of its mission to preserve and perpetuate the legacy of Woody Guthrie, the Foundation is releasing this recording with a 72-page booklet on Thursday, September 6, 2007. We’ll continue to update you as the release date approaches.

This is very exciting stuff indeed! The Woody Guthrie Foundation (on West 57th) is a great place and does really wonderful work.  If you haven’t been to their website (like you even knew it existed), I encourage you to navigate on over!

Anyhow, tomorrow think of Woody as you go about doing whatever it is you do.