home » in our window » Hurry Sundown

The ARChive’s “In the Window” feature is not always about music. Sometimes it can be about the packaging of the music—the cover. Such is the case at hand, with the cover of the soundtrack to the film Hurry Sundown.

Otto Preminger, whose movies almost always are accompanied by a stark, often minimalist graphic, directed this film. The image for Hurry Sundown is probably the most stark; the most minimalist: a simple drawing of two hands, one black one white—symbolizing the race relations depicted in the movie—with an orange orb in the background. The orb is obviously the sun, but, are the hands holding the sun up or tearing it down? Perhaps one is pushing and the other pulling. But wait, maybe these are not hands at all. The images were drawn with enough ambiguity that they could be two men screaming, raging at each other. The conflict in this image, designed by David Weisman*, is immediately apparent.

Mr. Weisman got his start in the film business drawing posters and screen titles for Italian films in Rome—including one for Federico Fellini’s 8 ½.

The artist Saul Bass  created the images and screen titles that accompany most of Preminger’s movies. Bass explored the concept of generating the most mileage out of a simple image, a concept that Weisman took to heart, as you can see in other album covers to Otto Preminger movies drawn by Bass. 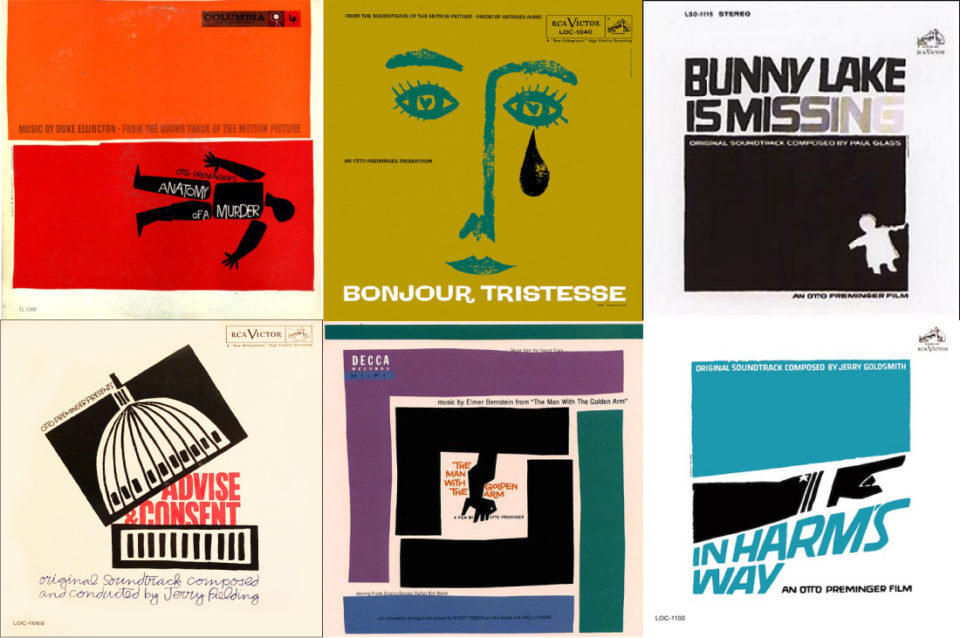 Bass drew the lobby poster for Hurry Sundown, but it was Weisman who drew the titles and created this unforgettable album cover, working within the Saul Bass tradition of “less is more.” After this, Weisman would make experimental avant garde films with people who had splintered from Andy Warhol’s Factory. His career included the editing, writing, directing and the production of several movies, including Growing Pains and Kiss of the Spider Woman.

Since we are a music archive, not a film or art archive, perhaps something should be said about Hugo Montenegro’s soundtrack to Hurry Sundown. Well, it’s a movie soundtrack, and as such, it seems to sound better with the movie in front of it. However, the title song was recorded by several artists, including Pat Boone, Harry Belafonte and Peter, Paul & Mary. Our favorite is by Little Richard and his recording shows what a great ballad singer he is.

Further on Otto Preminger movies: They often have great music in the soundtracks: Duke Ellington scored Anatomy of a Murder; the music for The Man With the Golden Arm was composed by Elmer Bernstein and arranged by Shorty Rogers, who also appears in it; and The Zombies have several songs on the soundtrack to Bunny Lake Is Missing (they kind of appear in the film, on a TV screen in a bar and also recorded a jingle for it!).

* – On the back of the album jacket, Weisman’s name is misspelled with two ‘s’s and two ‘n’s.