home » in our window » It’s COOL inside

In the middle of a long, hot summer, what we all could use is something cool. What is cooler than Miles Davis, the man who gave birth to the concept of cool?

Now appearing in the ARC Window on 54 White Street is the inside of the gatefold cover of Miles Davis’ 1985 album You’re Under Arrest. Mr. Davis created this artwork himself, so you KNOW it is cool.

We don’t need to state the obvious, do we–that Mr. Davis is considered one of the all time greatest figures in jazz? However, few may know that he was also a painter. The art of Miles Davis is mostly abstract, but many of his subjects appear to be in motion–such as the painting now on display. Some of his art can be viewed at the official Miles Davis Website and at the Daily Beast. Also, some of Mr. Davis’ work has been collected into an LP-sized coffee table book. 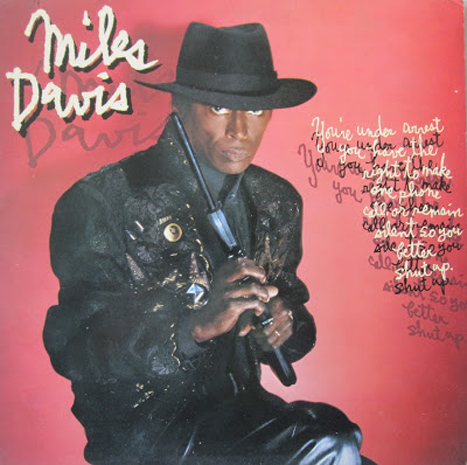 For most of us, purchasing groovy art to hang on our walls is way too unbelievably expensive. However, many great artists (Salvador Dali, Andy Warhol) made album covers and the work of just about any famous artist you can name has been used on the cover of an album at one time or another. Most of them are well within our budgets. Take this Miles Davis album; one can be obtained for as little as four dollars on eBay. Make sure you get one with the custom inner sleeve, which features another drawing by Miles Davis.

Next time you walk by 54 White Street, look into the window and feel refreshed. Feel cool. Hey, it’s Miles!