home » in our window » The Queen Is Dead! Long Live the Queen!

It has just been reported in the news that the great soul singer Aretha Franklin has died, so today the ARChive presents in the window Aretha’s Gold—14 of her best tracks that she recorded for Atlantic Records between 1967 and 1969—the tracks that cemented her position in life as The Queen of Soul.

Unless you are a teenager or from outer space, you surely must know that Aretha Franklin has one of the most fabulous voices in all of music. There is no need to go into her accomplishments here—check her Wikipedia entry for that. What we’d like to discuss here are a handful of her records that she made before she cut these amazing gems for Atlantic.

Aretha Franklin had been singing in front of people since she was a little girl, belting gospel songs at her father’s church. She even recorded a gospel album in 1956 when she was 14. Inspired by the success of Sam Cooke, another gospel singer who went pop, she decided to do the same and received her father’s approval.

The legendary music man John Hammond signed Ms. Franklin to Columbia Records in 1960. In August—58 years ago—he produced her first session. “Today I Sing the Blues” is a good soulful ballad written by Curtis Lewis, who, according to the notes of a 1972 reissue, introduced Hammond to Franklin’s music. The song was released as a single and by October it was climbing up the R&B charts. This bit of success prompted Columbia to make further recordings and she and Hammond returned to the studio in November (twice) and December. All of these recordings were made with Ray Bryant at the piano. Earlier in 1960, Bryant had a sizeable R&B hit with “Madison Time,” a novelty dance number, but his jazz credentials were intact having recorded with Miles Davis, Sonny Rollins and Art Blakey around five years before that.

Another great track from these early sessions is “Won’t Be Long”—a moving number that could have been a bigger hit if the square folks who ran Columbia Records at the time knew how to market it. The song is a fine example of gospel-influenced Rhythm & Blues that is propelled by Bryant’s percussive piano playing and Franklin’s wailing vocal. The song also did well on the R&B charts, reaching Number Seven; it even scraped the bottom of the Pop charts.

In order to have enough tracks for an album, a fifth session was called where three tracks were cut. On this January 10, 1961 session, Ms. Franklin plays the piano instead of Bryant. One of the tracks recorded was “Who Needs You,” a song co-written by Billie Holiday but not recorded by her. This must have been done at Hammond’s request, as he had worked with Holiday extensively. Franklin sings it pretty straight, perhaps with respect to its author. “Maybe I’m a Fool” is another bluesy, soulful ballad, the kind that Ms. Franklin excels at. J. Leslie McFarland wrote it, as he did “Won’t Be Long” and most of the originals over these five sessions. He was a journeyman songwriter whose compositions were cut by Louis Jordan, Bill Haley, Pat Boone and Elvis Presley, among others.

The third song is “Are You Sure,” a totally forgettable number from the musical The Unsinkable Molly Brown. Here, Franklin drags the song off of a Broadway stage, slaps it around and, for its penance, makes it sing “Hallelujah!” in her father’s church. This is a clear example of Aretha Franklin teaching a song how to be great. J. Leslie McFarland may have been the musical arranger for these sessions, but a lesser talent could not have pulled this off. Franklin would turn 19 in three months.

The rest of the songs on Ms. Franklin’s first album, the first of three in her career titled Aretha, are ballads. She sings them well enough, of course, and McFarland’s arrangements are fine, but they are not as exciting as these five. 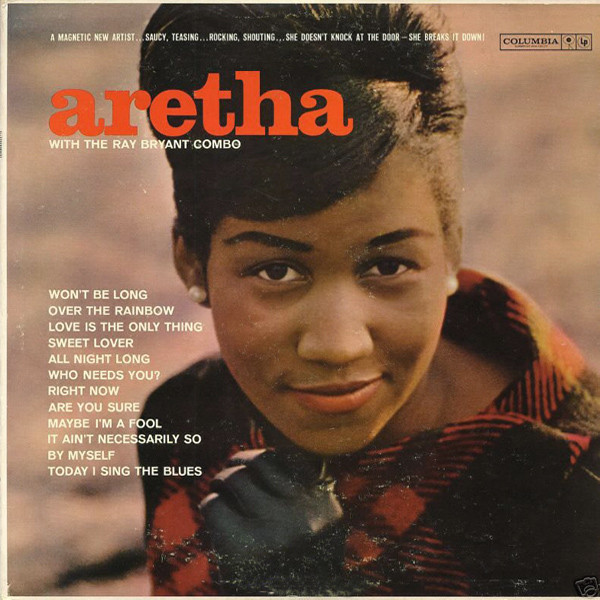 In fact, through most of her time recording at Columbia, Aretha Franklin was asked to record sentimental ballads, old standards and show tunes. Were they trying to make her the African American Barbra Streisand or the female Johnny Mathis? If you want to hear how “Try a Little Tenderness” sounded before Otis Redding funked it up, her version—cut about five years before the Big O—is a good one; but of course, you can’t mess with that voice. She cut such dregs as “Rock-A-Bye Baby With a Dixie Melody,” a 1918 hit for Al Jolson, and made it swing. This is the way the world worked back then: national success meant singing cabaret material on TV variety shows and at the Copacabana nightclub. Sam Cooke, some of the Motown artists and many others went this route early in their careers. It was how you got Frank Sinatra famous. Ms. Franklin did all that, too, but she only seemed to get so far using the same star-by-numbers method that seemed to work for Nat King Cole and Johnny Mathis. She was rarely able to take advantage of her gospel influence: the thing that made her magic. Some of it can be witnessed on these Columbia recordings:

In 1966, the contract with Columbia was over and she signed to Atlantic. In January 1967, Aretha Franklin recorded “I Never Loved a Man (The Way I Love You).” It sounded as if she had gone back to church and it was the first of a string of huge hits that she never got from Columbia, each becoming a classic. She would go on to have chart hits deep into the Nineties in a career that lasted from the mid Fifties until the day she died at age 76.

Here at the ARChive of Contemporary Music we mourn the loss of a great voice, Aretha Franklin.