home » in our window » Warren Covington… is In Our Window

The Music Window is a new blog concept developed in the laboratory of the ARChive of Contemporary Music. It consists of displaying an album cover in the ARC window (conveniently located at 54 White Street, Tribeca/lower Manhattan) every couple of weeks (or whenever we find one worthy) and saying a few words about it. 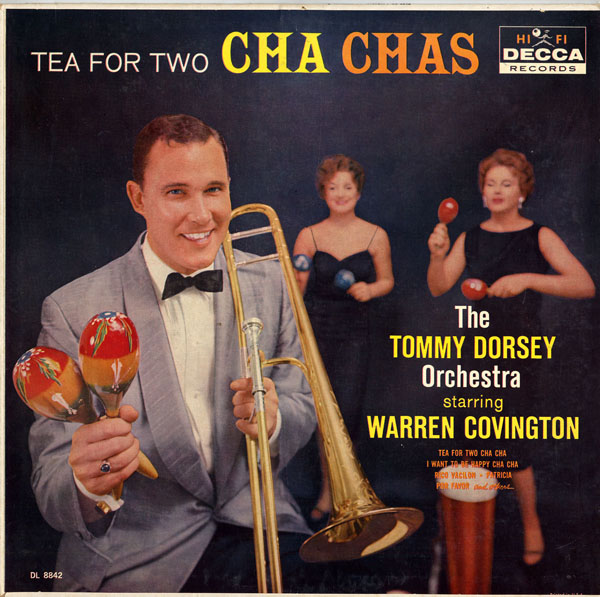 With spring getting ready to get sprung, a hot album cover is necessitated for the initial offering of “In the Window”…so here is Tea for Two Cha Chas by The Tommy Dorsey Orchestra starring Warren Covington. It was recorded about two years after Mr. Dorsey passed away (he died choking in his sleep in 1956). Covington idolized Dorsey and even briefly played in Dorsey’s orchestra in 1950. Both men played trombone. Both men favored a lightly swinging, jazz-ish big band sound. So after the passing of Dorsey, Covington went to his widow and asked permission to use his name to form an orchestra. “Tea for Two Cha Cha”—a mambo-ized version of the standard song, written by Vincent Youmans and Irving Caesar for the 1924 musical No, No, Nanette—was recorded and became a big hit in 1958. An album of similar material was issued, with a bow-tied Covington on the cover holding his trombone. Behind him are two ladies clad in lovely black dresses. Because this is a cha-cha record, everybody is holding maracas! Thus Covington was able to cash in on the cha-cha craze and big band nostalgia in one fell swoop. Kind of warms your heart, doesn’t it?

You can see many more and better Cha Cha covers in our gallery.