On Saturday March 18, Chuck Berry died of natural causes at his home near Wentzville, Missouri—a town west of St. Louis. If you have to ask, “Who’s Chuck Berry?” then I suggest you get back into your space ship and return to the planet from whence you came. Or check these links:

Chuck Berry Is Greater Than You Think

Chuck Berry is in the Rock’n’Roll Hall of Fame

Chuck Berry on the TAMI Show

Suffice it to say, Chuck Berry made some of the greatest records of all time and influenced several generations of kids to take up the guitar, either directly or indirectly. I saw him perform several times at Rock ‘n’ Roll revival shows in 1969, ’70 and ’71. By that time, he wasn’t working with a regular group and he was backed by the house band, that backed all the acts at these multi-act shows (Bo Diddley, Del Shannon, The Drifters, The Coasters, Freddy Cannon, etc).

Since around the mid Sixties, Chuck toured regularly, but not with a regular band. He would play with pickup musicians and rarely rehearsed with them, expecting them all to know his music—as well they should! Every musician who has played rock’n’roll since the middle of the last century should know these songs backward and forward. It’s like the alphabet; you have to know this! However, often the backing band did not know the songs well enough and it made for some erratic shows through the years. I saw Chuck Berry twice when he lived up to and even transcended his legendary status–both times his backing band was a factor.

First time was at the Roxy Theatre in Hollywood in 1977. He was backed by Johnny Rivers and his band. As you know, several of Johnny Rivers’ biggest hits were covers of Chuck Berry songs. So those guys knew the music, that’s for sure. The Roxy is a nightclub frequented by music industry folk and the audiences tend to be laid back. This was the only time I was ever at the Roxy when the entire place was standing up, even on tables and chairs, dancing. The band was great and Chuck was clearly inspired by it and enjoying it. One of my favorite R’n’R shows of all time.

The second time was at the 1986 Chicago Blues Festival. On a rainy Friday evening, in what was billed as a tribute to Willie Dixon–who played earlier that night, and who was the bass player on some of Mr. Berry’s early sides. Chuck was backed by his old piano player Johnnie Johnson, Willie Dixon, Matt “Guitar” Murphy and a couple others whose names I forget but who were introduced as having played on Chuck’s records. This was a band that clearly understood Chuck’s music, and even when they performed a slow blues like “Baby What You Want Me to Do” it sounded good. Toward the end of the set, Keith Richards came out and played guitar on the last few songs. Truly a spectacular moment.

In tribute to the late great Chuck Berry, the ARChive of Contemporary Music proudly displays in its window one of his early 45s. 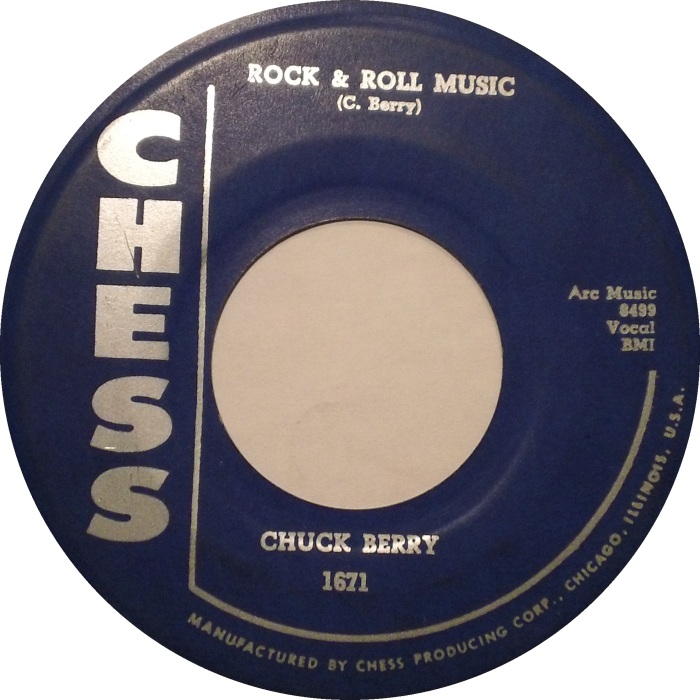